The History behind Mardi Gras Throws

Whether or not you have ever been to Mardi Gras in New Orleans, everyone knows that beads are involved. However, you may not know the reason that beads became a part of parades, and how the tradition developed over the years. 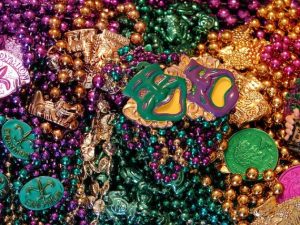 Back in 1827, students returned from Paris to New Orleans and wore costumes as they danced in the streets, such as they had seen maskers do in France. Originally, they threw flowers to the crowds watching them, and later on they began throwing actual flour.

The Twelfth Night Revelers, the first Krewe in the history of Mardi Gras, took this tradition further by throwing trinkets to the crowds starting in the 1870s. 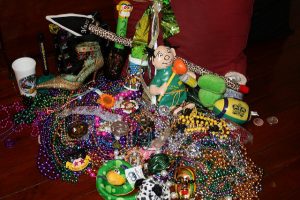 In 1872, the King of Rex tossed sugar coated almonds, a custom that originated in the English Renaissance Era. In 1884, Rex (another long-time Krewe) began using medallions to throw instead of trinkets.

Today, these medallions are represented by doubloons: aluminum coins that are painted in various colors. They depict the parade’s theme on one side and the Krewe’s crest on the other side.

In the late 1800s, glass bead necklaces were thrown by Krewes to represent regal jewelry. Of course, these beads became a hit instantaneously! Beads have remained the cornerstone of Mardi Gras for more than 100 years. 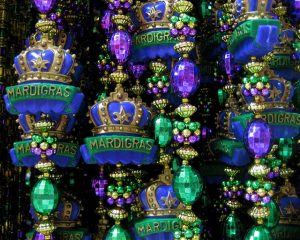 Other popular throws have emerged along the way including “to-go” cups, stuffed animals, and plastic spears.

Nowadays, glowing and blinking trinkets and beads are the new novelty.

Whatever the throw, whenever the time, one thing is for sure: Mardi Gras wouldn’t be the same without parade goers catching anything tossed their way!!